We had a look at the Nordic numbers related to startup investment activity from the Nordics for the first half of 2021.

The growing trends we underlined at the end of Q1 accentuated in all the respects.

Both the dollar value and the investment frequency increased considerably in the spring, resulting in a record number of Nordic deals for a half a year - 657.

Here's how the number of deals dynamic looks like. 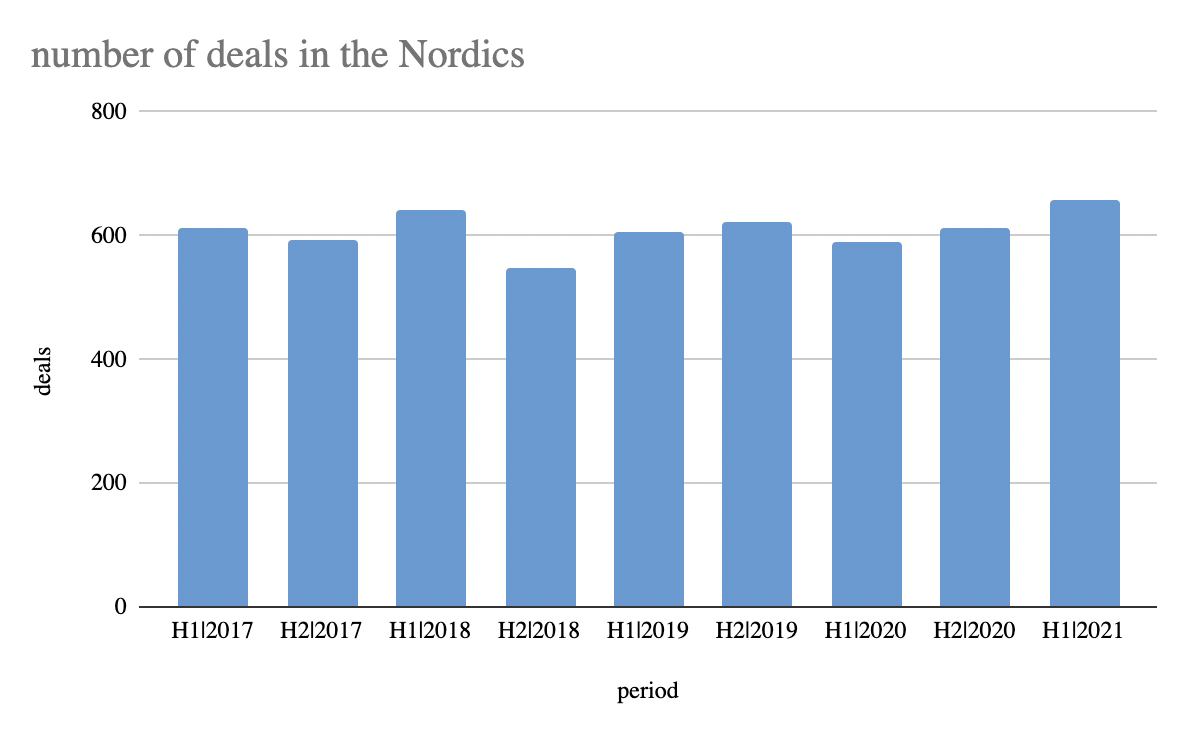 And here's what the absolute dollar value deployed looks like in time. 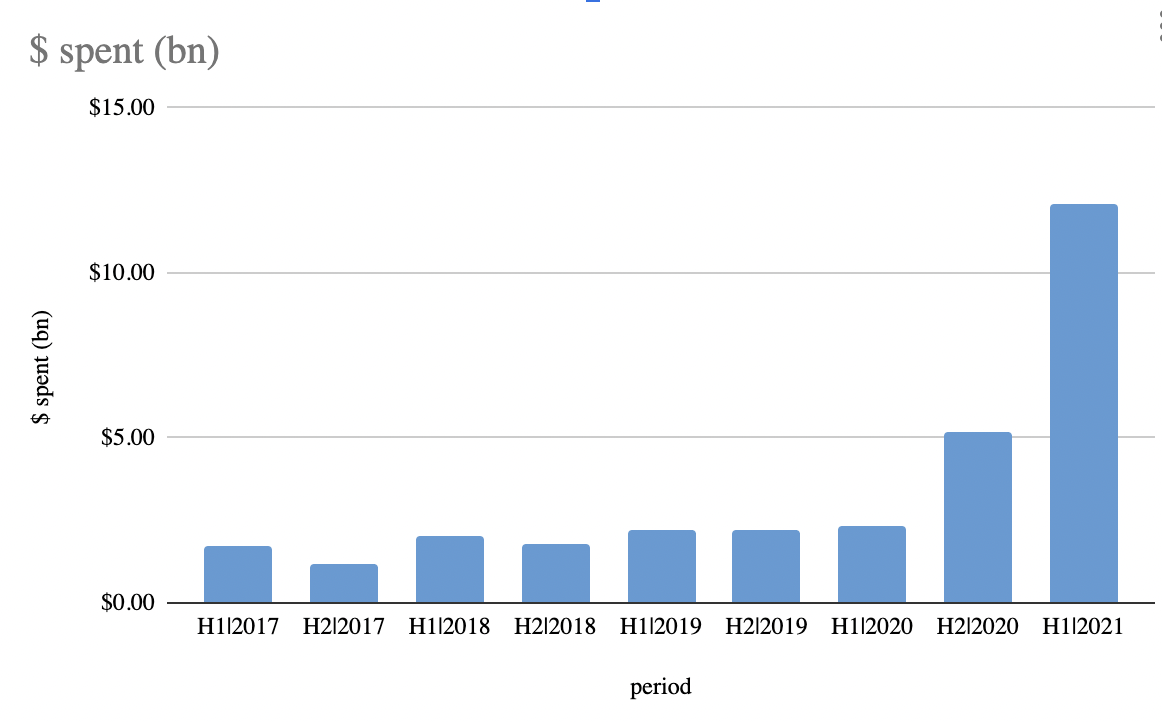 No surprises here - anybody with a marginal interest in this ecosystem knows that the market is full of money and that record amounts are spent for purchasing assets from the private market.

A recurrent theme though is that this money is spent at later stages, at higher than usual valuations for already established businesses. WHich is fantastic but it comes at the cost of shifting the attention from earlier stages, where fewer deals are done.

Let's have a look first at very early stages, how the trend looks like in terms of number of transaction done at less than $1M. 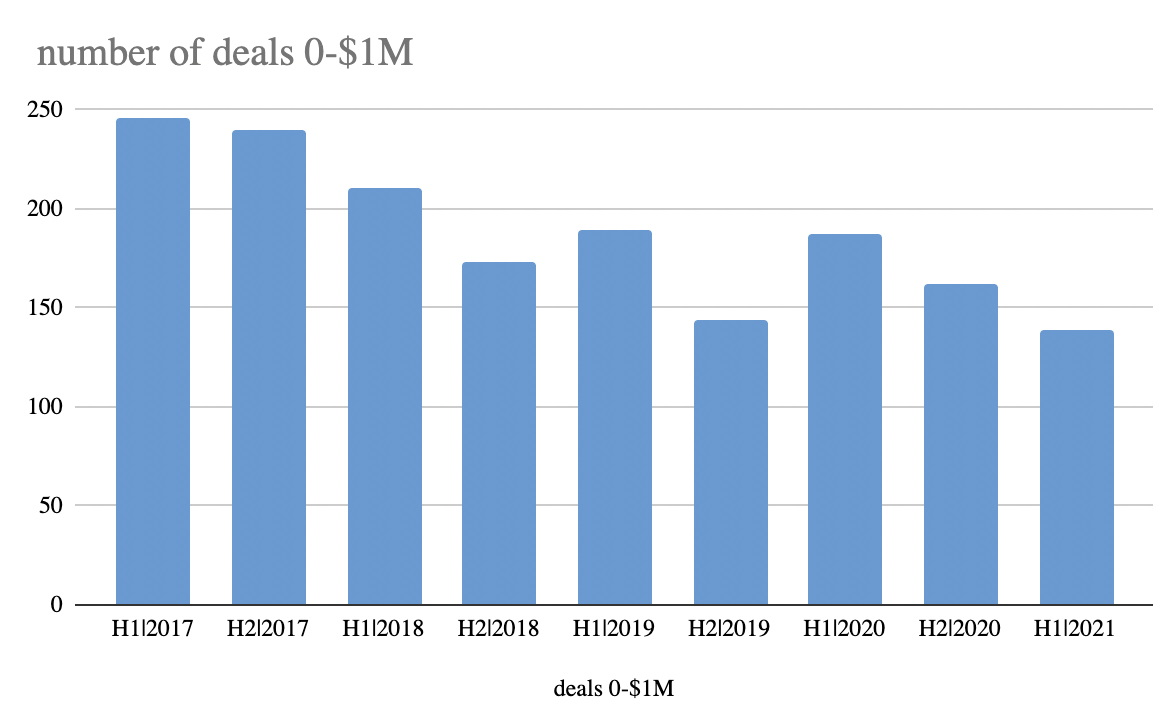 2. lower number of startups are launched.

When will this impact? In about 2-3 years when at later stage there will be a lower pool of condidates to choose from. See below for more. 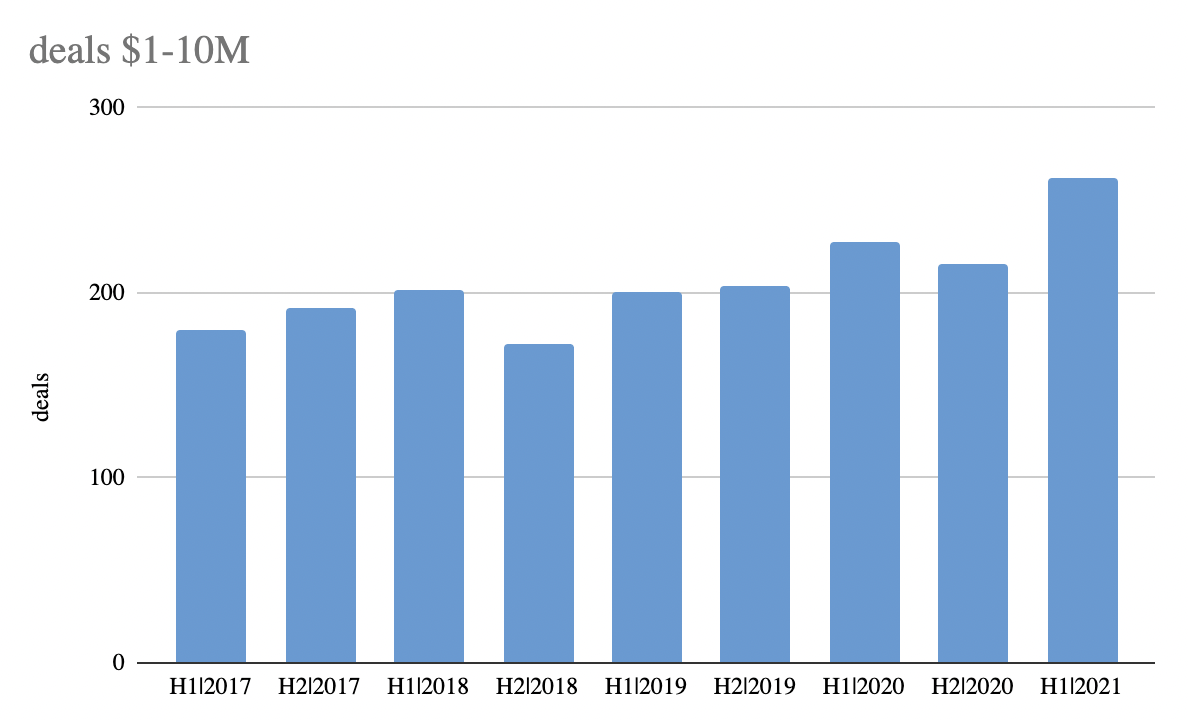 262 deals in the first part of this year is 20% growth from previous periods. More established companies attract more funding. Here's what the dollar situation looks like for the deal range. 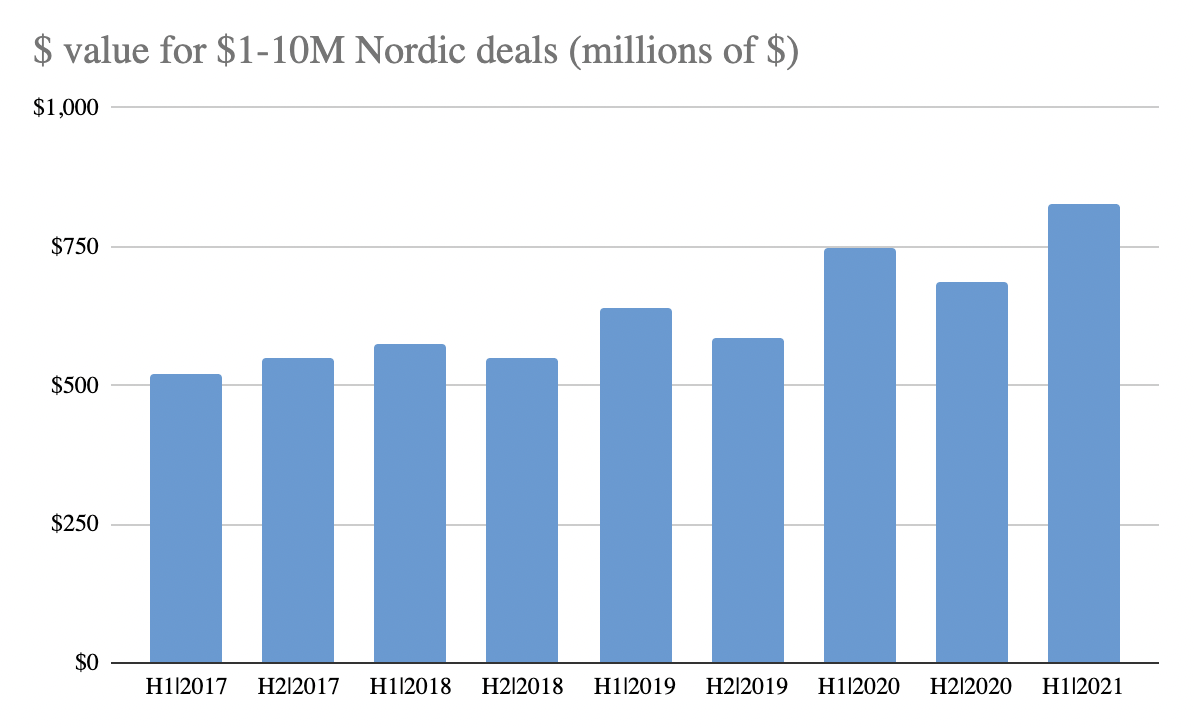 And here's how the later stage transaction situation looks like: 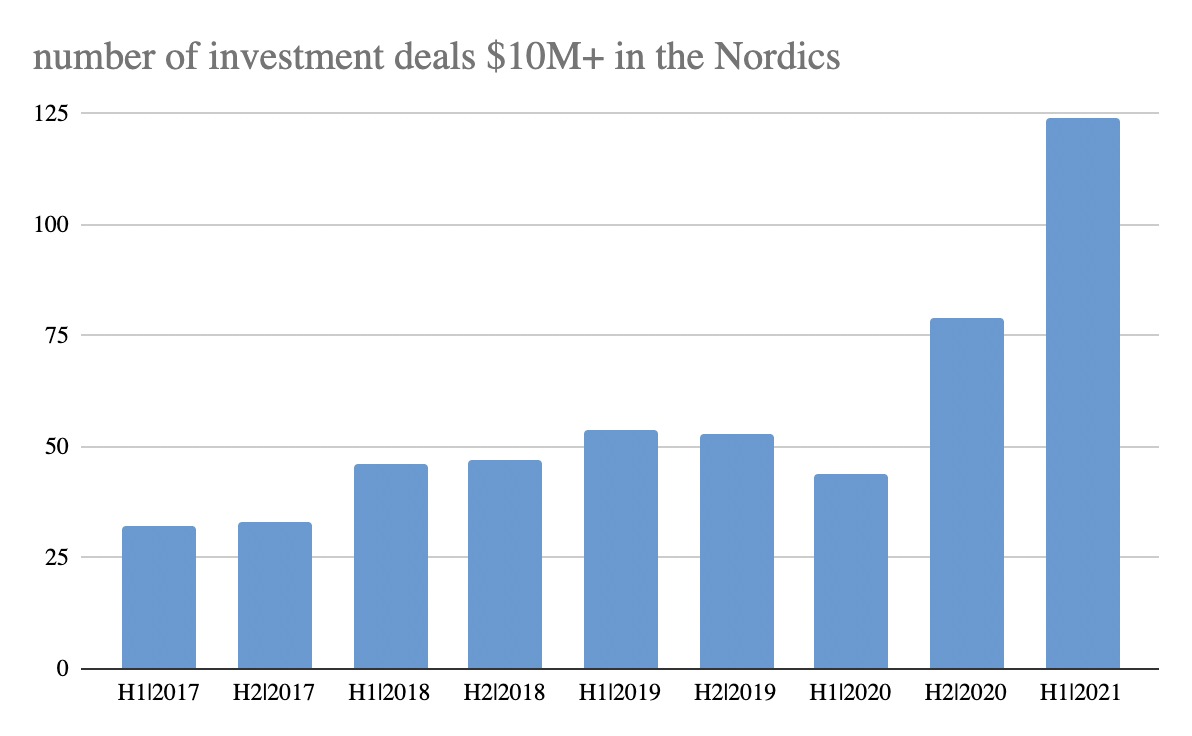 For the records, here's the dollar value distribution of $10 million+ transactions done in the Nordics. 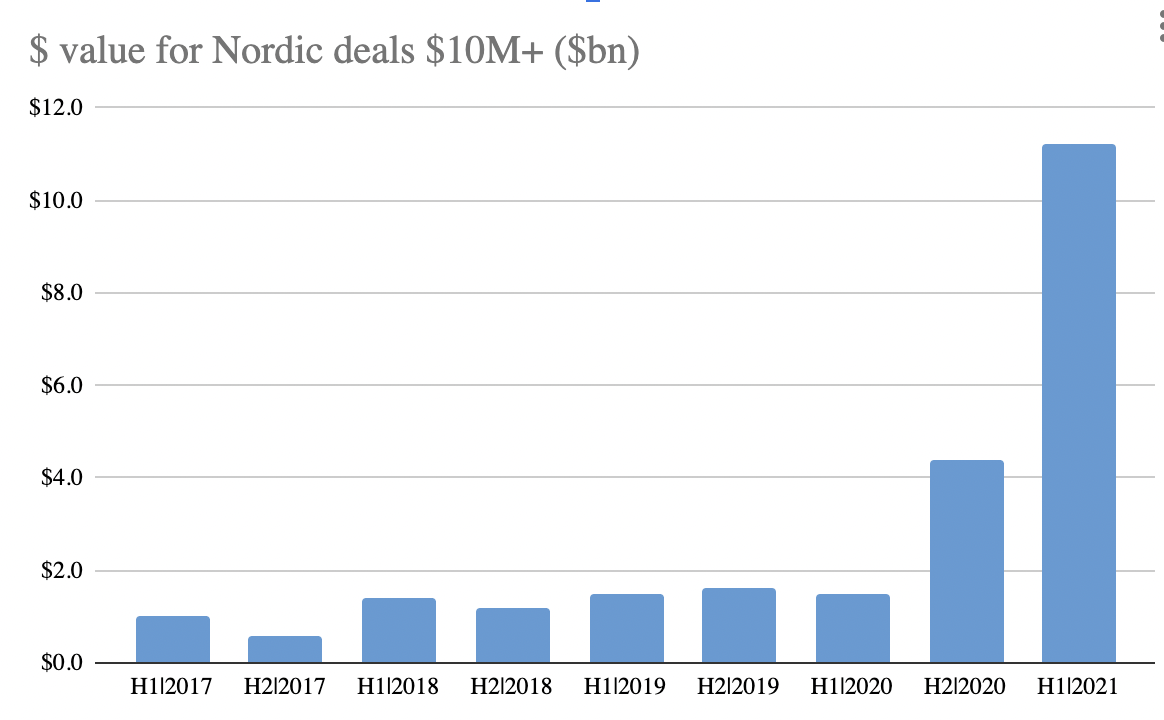 Getting back to what happened in the first part of 2021, we crunched below the specifics. As always, keep in mind that there's a data lag and that we only track equity deals made for minority equity stakes on the privately held companies. If you have any questions or you would like us to go a bit deeper on a specific vertical, just drop us a line, we sit on one of the better Nordic data sources out there.

If you're interested to dig deeper and understand more, we have created a few Nordic-focused reports crunching the H1 data:

You will need to log in in order to access the reports - they are part of the Cheat Sheet Library and provided complimentary with the data access to all N9 customers.

Not a customer yet? It's easy and very affordable to join - choose a package that suits your needs from here.